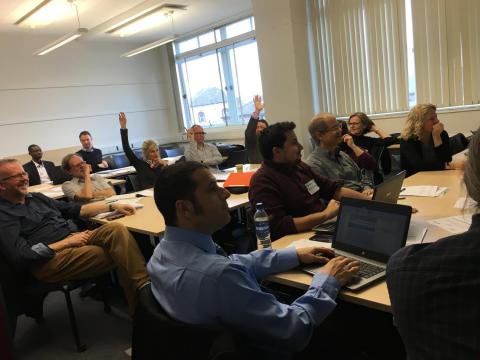 The Sanitation Team, along with several members of the user community, met in Leeds, UK. The meeting was held at the University of Leeds, Civil Engineering Building where professor Miller Alonso Camargo-Valero, along with graduate students Esther Sample and Carolina Montoya-Pachongo, were the hosts for the event.

The afternoon of the meeting was a user-community workshop, with various participants from NGO’s, universities, private companies, and government institutions.  With a tremendous amount of feedback from the users, the GWPP will be able to edit and tailor the content to encompass a diverse range of interests. Some of the feedback from the users includes:

Three more user community meetings are to be held during 2016: Chapel Hill, North Carolina, United States; Dar es Salaam, Tanzania; and Brisbane, Australia. The goals of all user community workshops are to use the feedback from the users to help improve the scope of the project and to optimize the usability of the resources for regional and global stakeholders.