Health risk of biogas effluent exposure and handling in Vietnam

(Image reproduced with permission of CAB International 2015. In Chapter 9: Integrated Human and Animal Sanitation One Health: The Theory and Practice of Integrated Health Approaches.)

The objective of this case study was to assess the diarrhea risks caused by exposure to pathogens in biogas wastewater. We aimed to assess the risk, and to recommend how farmers can reduce the risk when using biogas effluent and promote safe use of effluent. The overall management objective was to develop an integrated strategy for pathogen management and public health control in the agricultural setting.

In Vietnam, the reuse of wastewater for agriculture is popular. Due to poor treatment of wastewater before use, health risks posed by reuse activities might be important. Biogas has been used widely to treat animal manures and biogas effluent is reused for irrigation of crops and trees.

Want to read more?....Scroll down

The global increase in demand for livestock products has led to many concerns about the associated negative impacts of livestock rearing on the environment and on human health. In Vietnam, especially, the management of animal waste has become a considerable challenge due to the rapid increase in swine production. A common method to treat animal waste in Vietnam is anaerobic digestion, also called biogas technology. This is a microbiological process whereby organic matter is decomposed in the absence of oxygen. Animal manure as well as human faeces can be used as feedstock. The outputs of anaerobic digestion are biogas (a mix of methane and CO2) and a digestate wastewater, which is the digested slurry existing the biogas reactor. The efficiency of the biogas reactor in inactivating pathogens will depend upon the temperature and the residence time, which in turn will depends upon the efficiency of the hydraulics within the reactor.

Biogas plants in Vietnam have often been installed by farmers individually, and mostly at household scale without much technical support or advice. This frequently leads to biogas plants which are not properly designed, constructed, operated or maintained. This limits the efficiency of microbial removal and thereby affects biogas production.

Ha Nam is a province in the North of Vietnam where there is frequent use of biogas plants with farming households raising pigs. Many of these farmers use this effluent for irrigation of vegetables, crops and fruit trees, or then discharge it to drains. In addition, local people rarely us protective measures when handling the biogas wastewater to prevent exposure.

The risk associated with handling biogas effluent is not well known. The aim of this study was to quantitatively assess the diarrhea risk associated with exposure to biogas wastewater, that could occur while undertaking a range of common activities. The results were intended to provide a better assessment of health risk, assess safety and identify the need for further interventions.

a) Source: From three communities, 15 households with biogas plants were randomly selected. At each household, two sampling points were identified: the first one at the effluent tank of the biogas plant and the second at the open household drain into which biogas effluent, wastewater and other runoff flow (Fig1a).

Figure 1 a) Scheme of a biogas plant and the two sampling points [Source adapted from Tilley et al., 2014)] (Image reproduced with permission of RightsLink / Springer Nature). 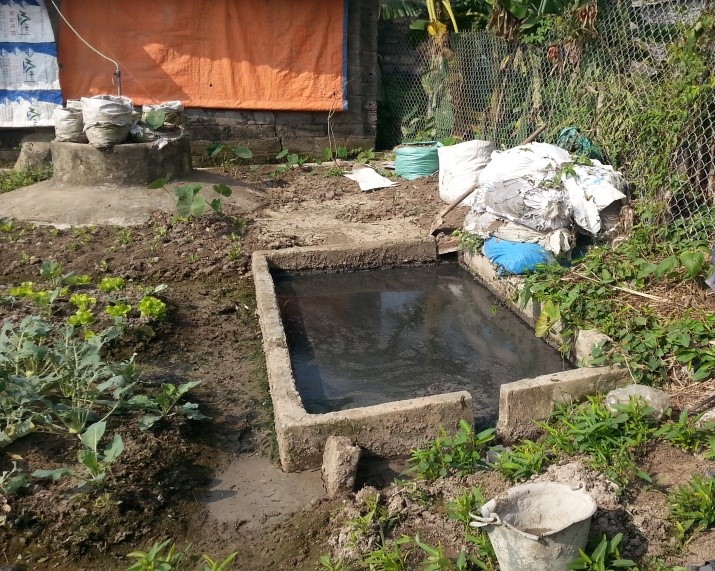 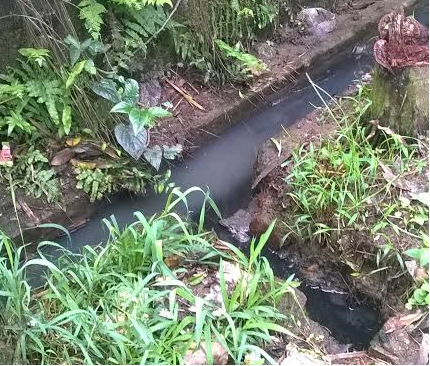 The effluent tank of the biogas plant is a point of exposure as that is where farmers collect effluent for irrigation of fields (see Fig 1b). The household open drain is also considered a potential point of exposure as this drain often needs to be unblocked by users (see Fig 1c). Three wastewater samples were collected at each sampling point. Thus, five rounds of sampling gave us a total of 150 wastewater samples collected from April to December 2014. Results are summarised in Table 1.

b) Barriers/controls: No barriers were considered in the risk calculations, however use of personal protective equipment was investigated by survey,

c) Exposure: A survey was conducted in each of the three communities to assess the intensity and duration of exposure associated with each of the defined activities. From a total of 1500 households with biogas plants, 451 households were randomly selected. The survey recorded basic characteristics of biogas including their age, material used (animal or with human faeces) and residence time. The majority of respondents (84%) indicated that their main occupation was working in agriculture. The frequency of exposure, ingestion dose of wastewater, and percentage of the population who participated in each exposure event are shown in Table 2. For the study, it was assumed that 1mL of wastewater would be involuntarily ingested with each exposure event (Hoglund et al., 2002; Ottoson and Stenstrom, 2003).

Dose-response models, and illness probabilities from the published literature were selected for each of the three reference pathogens. These are summarised in Table 3.

The high risks calculated in this study suggest that further actions to improve biogas effluent quality are required to reduce health risk. The study provides evidences to enhance the awareness of people when handling biogas wastewater, and hence promoting practices of using personal protective measures including wearing gloves, wearing face masks, wearing boots and washing hands with soap after work.

Evaluation of the QMRA

The QMRA provided a way to interpret the significance of the measured concentrations of pathogens in the biogas wastewater. The investigation of how biogas wastewater was being used in the community, together with potential exposure scenarios, allowed for the local context to be considered. In addition, the current use (or non-use) or protective equipment provided context for the efficacy of existing risk management options. The combination of environmental microbiology, analysis of local behaviours and quantified in terms of diarrheal risks, provides a powerful platform to advocate for improved safety, and community understanding of the risks associated with the biogas wastewater.